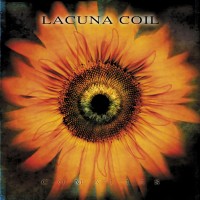 
The 2002 album Comalies is purportedly the most well-known album of gothic rock luminaries Lacuna Coil. It seems that nearly everyone I know who has given this disc a spin has enjoyed it to, at least, some significant degree. Indeed, when frontwoman Cristina Scabbia was inquired on her favourite Lacuna Coil song, she replied with "all of the songs on Comalies."

As an introductory note, I'd like to express the idea that I don't technically consider Lacuna Coil to be a metal band. Their drumming isn't particularly fast, there are no growling/shrieking vocals, and they do sound a bit "mainstream-ish." I do, however, consider them to be top-notch rock artists. In any case, if you seek brutally aggressive, brain-addling, rape-me-with-sandpaper-condoms metal music that leaves you in a pool of your own blood and other bodily fluids, then give this album a miss.

Now what, if one may pose the obvious question, qualifies Comalies to receive a perfect rating from me?

Perhaps the most distinct factor is the sheer catchiness of the songs. The music is composed in such a way that simply remains stuck in your head, with individual tracks like "Swamped," "Daylight Dancer," and "Unspoken," to name merely a few. Regarding the instrumentation, the band employs fine usage of both acoustic and electric guitar work, as well as mixing a bit of experimentation compared to the band's precedent albums. This frequently takes the form of synthesizers and interesting vocal editing, which can, for example, both be found at the beginning of "Humane" as well as throughout the rest of the songs generally.

The vocals are also much better than the average band out there. Cristina Scabbia is personally one of my favourite vocalists, which I can perhaps attribute to her uniquely transcendent voice (which is conspicuously exemplified on the semi-intermezzo track "Aeon"). Additionally, male singer Andrea Ferro's voice is undoubtedly the perfect secondary to Scabbia's solid, clear-cut (and somewhat deep for a woman) vocal melodies. This is indubitably one of Lacuna Coil's strongest points: the ability to use the male/female combinational singing very proficiently. Both have have certainly progressed and matured as singers since the time of their first release, the 1998 Lacuna Coil EP.

I would recommend Comalies to anyone who has liked any other Lacuna Coil album, or rock music broadly (I think musically they may be categorized very well with other talented rock bands such as Disturbed, The Birthday Massacre, Godsmack, Evanescence, or post-1998 Within Temptation). As well, anyone who enjoys female-fronted metal bands like Nightwish or The Gathering may want to give this album a venture. Just be forewarned that you may find yourself replaying the memorable melodies in your head for the rest of the day.