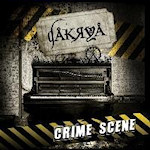 
Ah! It is humanity and its inherent insanities that makes me wear all these false masks of personalities! But no, wait, why is it that when I try to take them off, I cannot recognize myself, my world!? Perhaps I've imposed it upon myself, deceived myself as part of my own game! I must resist the greater fear, my greater fear, ourselves, myself! Always... I return to the same point of successful misunderstanding of reality! I must break free... But to what, I cannot say! Maybe it is just safer to stay masked like a clown, as always...

Dakrya present a playfully bewildering environment that combines a spiraling mix of The Imaginarium Of Doctor Parnassus and echoes of the madness of Edgar Allan Poe. A drastic evolution from the complex gothic world of their previous release, Crime Scene reveals a band committed to a new direction and sound, one of pristine production, thought provoking social criticism, and a circus mayhem that is as equally ominous in its message as it is warm and whimsical. Thoroughly avantgarde and composed by keyboardist SophiaX, the album cunningly enters your mind after a few curious listens, like the feeling you have when you notice blood upon your hands and shoes, yet have no recollection whether it is yours or another's, but can't resist the knowledge something malicious happened.

From the illuminating psychoses of vocalists Thomais and Christina, which fill the air with breathy melodies and maniacal realities and lies, to the cold mirror images that guitarist/vocalist George provides with his lines, Crime Scene is dark theater in which the characters themselves are frightening, but the audience it plays to is even more so. "Phantasmagoria" is an inescapable romp through a city's shopping district, filled with SophiaX's keys that tickle at your eyes like the vibrant electronic colors and lights that tempt through a store's windows. Stavros's drums here remind me of my own footsteps as I try to resist the urge to buy it all, only to be overwhelmed by the infectious combination of propaganda that the band's three vocalists barrage my thoughts with. "The Urban Tribe" offers a jocular vision of the commercialized hysteria that envelops the modern world, as the synths and some weird samples laugh their way beneath riffs that act like an ever-approaching group of cloaked masterminds who widen their smiles with each new crime and disturbance.

One of my favorite additions to the album is the guest saxophone melody from Constantine Triantafillou in "Camouflage," which dances around you with the mesmerizing rhythm of a juggler of your worst dreams, enjoying every moment as you search for a way out of the drama. It's these small interjections that slowly begin to filter into each successive listen and make the album a cohesive world of its own, creating an offbeat approach to album development. Crime Scene is like buildings at night that loom above you as you stare at the sky, only to realize that the buildings are curving down toward you, showing more and more detail with each passing moment. From the celebratory "Dramatis Personae," which mocks humankind as it praises its own horrifying plot, to the darker "Inertia," which is haunted by a guitar riff that is a foreboding tumble into an unknown void, Dakrya have created an at once accessible setting that follows the band's own rules as well.

For those in search of those rare bands that can perform mischievous avantgarde metal, one that is peppered with countless catchy melodies as well as exquisite male and female vocalists, all done within a harrowing social insanity, Dakrya is surely a band worth exploring. Because, honestly, a carnival ride of egotistic madness is so much more entertaining than reality, is it not? So come along, so they say!

Written on 27.01.2011 by
Jason W.
Music and the written word are two of my passions in life, so I figured, why not combine the two?