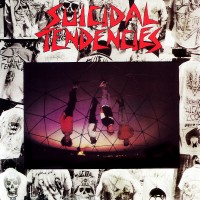 The album opens up with about 15 seconds of diabolical laughter and cacophony before Suicidal Tendencies unleash a hard core punk meets metal hurricane. This album is intense. It is a sonic atomic bomb.

Truefact! This album has so much energy that you could power a city of 750,000 with it, if you could convert music to electricity.

Released in '83 - the same year as Metallica's Kill 'Em All and Slayer's Show No Mercy - it seemed every bit as furious and perhaps ahead of its time.

The band pumped out 30 minutes of lightning fast hardcore/skate punk with some mid-paced anthems and a clear and present metallic edge, as guitarist Grant Estes solos all over the place. Not the chaotic solos of fellow punk axe man Greg Ginn (Black Flag), but air guitar inspiring leads and fills. Hell, he even wanders up and down the fretboard soloing away while Mike Muir is singing the verses of some songs, leaving bassist (and awesomely named) Louiche Mayorga and drummer Amery Smith to provide the backbone.

Mike Muir and the boys tackle a wide variety of topics, capturing the nihilism of the Cold War era ("Memories Of Tomorrow"), anti-authoritarianism common in both punk and metal ("Fascist Pig"), politics, and the desire to be more than just a face in the crowd ("I Want More").

The band also shows a dark sense of humor with tracks like "I Saw Your Mommy" ("I saw your mommy and your mommy's dead/I watched her as she bled") and the ubiquitous "Institutionalized"… which has appeared in movies like Repo Man, Iron Man, as well as TV in an episode of Miami Vice. It was an appearance of the video for this song on Weird Al's "Al TV" weekend on eMpTy-Vee which turned me on to the band in the first place.

The album comes to a brilliant close with the wryly titled "Suicidal Failure", which chronicles the ordeals of a poor young man who is such an epic fail he cannot even kill himself properly… "I beat myself with a bat/put a noose around my head/I overdosed on heroin/and I'm still not dead!"

The biggest "flaw" in the album is that half a dozen songs are so awesome that they horribly overshadow the merely good to great tracks which comprise the rest of the album. Songs like "Possessed" or "I Shot The Devil" are great in their own rate, but pale in comparison to some of the aforementioned tracks. They aren't filler.

So it's "skate punk" or whatever and not a "proper" metal album. I don't care. It was fucking awesome then and I still find it fucking awesome now, almost 30 years later. And if you don't like this album, it doesn't matter, you'll probably get hit by a car anyway.