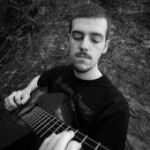 Derelict Earth's new album Below The Empty Skies was released on Bandcamp on December 16th, 2012. It is now available for download and streaming at any price (including for free) at this location. Enjoy. The cover artwork was created by Manthos Lappas.

The album artwork for French extreme prog project Derelict Earth's upcoming album Below The Empty Skies has been unveiled and can now be seen below. The artwork was created by Greek artist Manthos Lappas while the textwork was done by Dominique Stainer.

Below The Empty Skies is tentatively scheduled for April 2012 and will be released for free as were all Derelict Earth previous records. More album details here.

Quentin Stainer is currently working on new material for Derelict Earth and has already completed a first song for what will be a third full-length album planned for 2012, following the release of And So Fell The Last Leaves... earlier this year.

The following statement was made on Derelict Earth's official Facebook page: "First song completed for what will be an upcoming third album! I still don't know if I will be able to complete it before the end of the year so expect it for 2012, especially since the songwriting is even more dense than on And So Fell The Last Leaves.... The website is also well advanced, I expect to launch it before the next month so I will be able to contact labels and webzine for some promotion!"