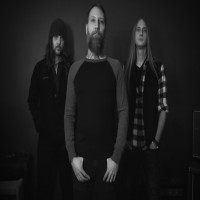 Britain's Metal Hammer magazine recently drafted Icarus Witch for both their cover mount compilation CD as well as an interview on their feature about the explosive rise of traditional metal with the younger generation of bands, referring to the Witch as "One of the best new bands to take up the NWOTM (New Wave of Traditional Metal) standard and carry it triumphantly into the future. With such accolades, the pressure is mounting for the group to top their previous efforts, a feat which has been handily accomplished by the creation of this new album, their first since 2007's critically acclaimed, Songs For The Lost.

With a few years of regional headline touring under their belt as well as supporting everyone from Heaven And Hell and Coheed & Cambria to 3 Inches Of Blood and Trouble on the road, the boys honed their live chops and discovered the formula for what translates to a frenzied crowd and what passages are better left for the headphones. The end result is a nine song battle cry called Draw Down The Moon which sees the band in a more mature, yet increasingly aggressive song writing mode, stripped of the extraneous bells and whistles of synths & samples.

This is a back-to-basics, classic metal album with a raw, in-your-face production (once again with Eric Klinger at the controls) that owes as much to '70s Marshall overdrive and gothic tales of yore, as it does the 80s flash and modern metal trappings that have become de rigueur in this burgeoning scene Icarus Witch is alleged to have helped establish. Apparently the time machine has been set to reverse, and once you dig your teeth into the muscular framework of this future occult rock classic, you will forget about eras, genre tags and hype, and realize what truly matters most... this band knows how to fucking ROCK!