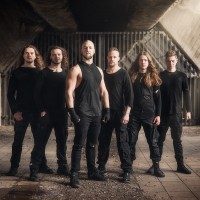 The band updated: "We're proud to announce that after several long and workloaded months we finally finished our 2nd album. And we are more than content with it, eager to share it with the world."