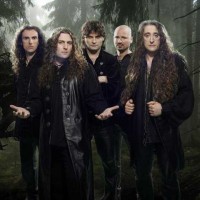 It took a couple of years for it to happen, but the revamped Italian storytellers Rhapsody Of Fire have just unveiled the name of the upcoming album, which will be their first album to feature new songs with their new vocalist Giacomo Voli and drummer Manu Lotter, after the departure of legendary vocalist Fabio Lione and drummer Alex Holzwarth back in late 2016. The new album will be titled The Eighth Mountain, and it will be first chapter of the band's next epic saga, "The Nephilim's Empire". This release will be accompanied by a European tour, starting in Barcelona, Spain on February 21st, 2019. The Eighth Mountain will be released a day later, on February 22nd, 2019 via AFM Records.