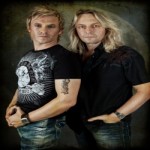 January 24th, 2020 has been set as the official release date of the Wolfpakk's upcoming studio record, entitled Nature Strikes Back. The outing, which will be released by Massacre Records, will feature a total of 32 guest musicians from the hard rock & metal scene. The front cover was created by Rainer Kalwitz Art and can be seen below as well as the album's tracklist. First official single will be unleashed on December 2nd.