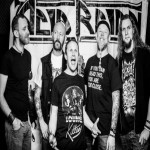 British thrashers Acid Reign recently announced on Facebook that their original bass player Ian Gangwer has passed away. No cause of death has been disclosed thus far. Ian co-founded Acid Reign back in 1985, performed on two records with them - Moshkinstein (1988) and The Fear (1989) - and parted ways with the band just before the making of their third release Obnoxious (1990).

The band wrote the following statement: "This is the saddest day in our history as we announce the passing of former bassist Ian. He came up with the name, an early version of the logo and lit up Moshkinstein & The Fear with those trademark hyperactive basslines."

Vocalist Howard "H." Smith also mourned the loss of his former bandmate: "We went to school together and had a lot of the same classes. We would spend most of our time laughing, in fact that is how I will always remember Ian, laughing. Throughout his time in the band we kept laughing and after he left we always stayed in touch and met up for drinks. He got in contact in 2019 after the release of TAOE to congratulate us on "an outstanding thrash album", he told me he was proud of me, it was one of the last things he said to me. It meant so much coming from one of my oldest friends. I will miss you more than you know buddy, rest easy."