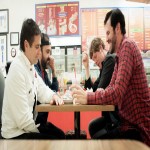 California based Kowloon Walled City announce the release of Piecework, their fourth long player and first one in 6 years. It will be put out on the streets through Neurot Recordings and Gilead Media on October 8th. Recorded by Scott Evans at Sharkbite and Antisleep, and mastered by Carl Saff. Via Bandcamp below, you can give a spin to two streaming preview tunes.


Filmed by Melyssa Anishnabie and edited by Sean Evans