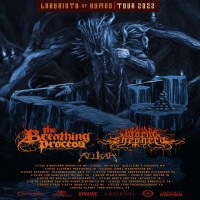 The Breathing Process and Worm Shepherd will join forces for the 'Labyrinth Of Hymns Tour'. The latter will cover performances in cities of the eastern part of the United States. Alukah will serves as an opening act on the road.