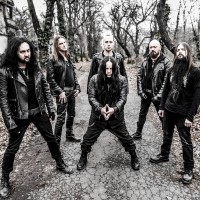 In a new interview with Pierre Gutiérrez of Rock Talks, Sinsaenum vocalist Sean Zatorsky confirmed that they have almost written all music for their third full length effort. The band have also found a new drummer, who will replace Joey Jordison. The name will be unveiled soon.

About new album Sean Zatorsky says: ''We have already written [a lot of the new record]. We still need to work on lyrics and we need to kind of piece the rest of the songs together. So we're kind of still in that halfway point of having a tangible product and taking it to be mixed and then still needing to write a little bit and put the polishing touches on stuff."

About the drummer Sean comments: We do have a drummer. I can't really say who I'm - not really allowed, unfortunately - but it is someone that we know… The guy we got's great… He knows the band and [he's] a friend, and it'll just be a perfect combination, from what it sounds like. He's known Fred [guitarist/bassist Frédéric Leclercq] for a long time, but I know him too. We became friends through mutual people. [He's] not [in] a super-famous band, but he does in some [other] bands [as well].