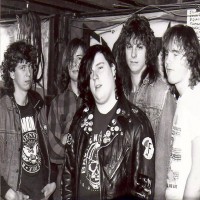 Pittsburgh thrashers Eviction have been back together as of late. The band played their first show in almost 30 years last Saturday (June 18th) at The Brooklyn Monarch in Brooklyn, New York and then they will play another show this Friday (June 24th) at The Spirit in Pittsburgh. As for what the future holds for the band, frontman Todd Porter recently told 69 Faces Of Rock that they have been "working on something" for what could result in the second Eviction album, the follow-up to their classic 1990 debut The World Is Hours Away.

On whether or not there will be new music, Todd Porter elaborated: "We were working on something. We don't know yet. We got two shows to do, we got [a show at The Brooklyn Monarch], and then we have a Pittsburgh reunion show in a week, so we'll see if we can stand each other for a little bit. We all have different projects, we're all in different bands. Now, I'm in a band since 2001 called The Cheats, Robbie's just finished his...he was in the Volcano Dogs with the bass player now, that's done, and he has another band with our current guitar player called The Lords Of Loch Ness. So I guess we gotta make time."