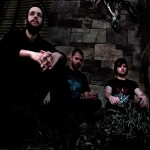 Comments the band: "Some of you make recognise the beginning of the track from the studio footage we released in April. You can now complete listening to this song via the link below. The title of this track is based on the Pandora's Box mythology, which was incorrectly translated by Erasmus in the 16th century.

"This ‘box’ was in fact a large jar or 'pithos' used for a range of general purposes, as well as burials. This song is about succumbing into temptation, and staring knowingly into the abyss."