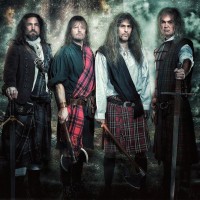 Napalm Records announce that the legendary German Metal band Grave Digger has joined their ranks. The band, who has been releasing cult classics since the early eighties, signed a worldwide record deal with the Austrian label.
Currently, the band and charismatic frontman Chris Boltendahl are working on their new studio album "Ballads of a Hangman", which will hit the streets on 9 January 2009. A yet untitled MCD will be released as a preview on 28 November 2008. More details cannot be revealed at this point in time, but the band promises that the new recordings will consist of "120% Metal." Headbangers can expect a celebration of true classic Heavy Metal.

Chris Boltendahl: "Grave Digger look forward to working together with their new label Napalm Records. We have observed the excellent work of the label in the past few years."

"Napalm did see the writings on the wall and is one of the leading companies for example in Online Promotion and Marketing. They elevated older bands like Atrocity to new heights and established newcomers like Alestorm. Thus, we are convinced that Napalm will bring out the best in us, and in return we will deliver a masterpiece of German True Metal. A storm is coming, the sea is rough, the coxswains are the veterans, only the ship is new and manned by an excellent crew who know their craft."