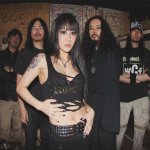 "Finally, here we reveal the cover artwork for our eighth studio album, "Scenes From Hell". It was designed by Eliran Kantor (Testament, Mekong Delta, Gwar, etc). We're truly proud of the artwork. This is the perfect descrition of what the album is about - namely War, Hell and Death!

The End Records has set January 19, 2010 release date for this album.

As reported before, it features a real string quartet and real orchestral instruments such as trumpet, trombone, french horn, tuba, flute, clarinet and so on, and it turned out to be the perfect score to the scenes from hell. We can assure you that this is by far the most grandiose and powerful album by Sigh. Also, the album features the great aural cooperations from David Tibet (Current 93) and Kam Lee."