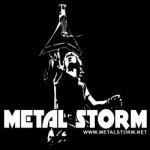 And the winner of Metal Storm's All Time Favourite Album art is none other than Cormorant! Congratulations to both Cormorant and artist Alice Duke on the great artwork.

Here's what you, the Metal Storm community, chose as your favorite album artwork:

Here's what the creator, Alice Duke, had to say:

"So the band had a really clear idea of the kind of thing they wanted, a kind of Bruegel-esque Tower of Babel with sections that linked thematically to each song. They were also pretty clear that they wanted to try to stay away from clichéd "metal" imagery, which made illustrating parts like the invading forces at the bottom a challenge. My background is in videogame concept art and comics, both of which can veer towards dark and complex imagery, so I really relished the story telling opportunities in making such a big piece."

"Generally I worked to a specific brief, it involved a lot of emailing back and forth ('how about adding this to represent this' etc) with various band members chiming in. Surprisingly this wasn't as frustrating as it might sound - I've had much pickier clients and they were very open to ideas I had, the whole process felt very collaborative. I also had the music on hand, as well as the lyrics, to mine inspiration from and make sure that I stuck to the overall concept."

For those of you who want to know a little more about Alice Duke herself:

"I'm a concept artist, illustrator and comics drawer based in Liverpool, UK. I've illustrated short comics for a variety of publications, including The Graphic Canon, Nelson, Lovecraft Anthology Volume 1 and Nevermore. I also make album covers, posters, book illustrations and now as a day job I draw things for games.

You can find my sketchblog at http://alicedraws.blogspot.com and twitter updates at http://twitter.com/aliceduke."

And of course, we couldn't leave things without hearing from Cormorant themselves, here's what guitarist Nick Cohon had to say:

"That is really so cool! Thank you very much for the support and publicity. We definitely didn't think that this artwork would be in a competition with these other bad-ass bands. Some of my all time favorites are Drudkh's Autumn Aurora, Enslaved's Frost, and Ulver's Shadow Of The Sun. The Alcest artwork is pretty cool too."

"Surprisingly enough, after we finished the art design for Metazoa, we wanted to scale it back, simplify it and add more of a human element. In hindsight, I think that the anthropocentric element was achieved, but it still is quite busy visually. Alice did such a good job though that there was very little we wanted to remove although there are some funny drafts that included swords and shit which probably will never see the light of day. This art is really meant to be a poster, 4-5 ft tall and 1-2ft wide as is Metazoa and eventually when we get our stuff together, we'll print them to order and sell them. Arthur printed one himself and it is breath taking!"

For a full interview with Cormorant discussing this artwork, go here.

Cormorant are currently on tour with Primordial and While Heaven Wept. Go here to check out the tour dates.