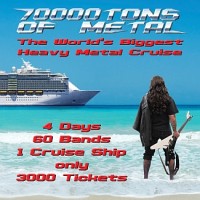 I love the smell of "Napalm In The Morning" … well, not really, but there I was, preparing to write this 'Getting Stoked' article, and the organizers of 70000 Tons Of Metal made their first thrash metal band announcement for next year's cruise - Sodom.

Fair Warning Disclaimer: Even though I already mentioned this in a prior report and before you continue reading, I want to lay emphasis on some facts you really need to be aware of:

1. you will not know the full line-up until probably the day of sailing since the band announcements will come sparingly throughout the year, but in the end it will work out and most major genres will be represented
2. you will not have to stand in mud if it rains and your sleeping accommodations are close by, dry and include a full bathroom
3. you will have the time of your life
4. you will run into musicians all the time; they roam freely among the fans
5. you will need to set a budget for alcoholic drinks - trust me
6. you will need little or no money for food since it's included with the ticket price
7. you will want to arrive a day or so before departure to partake in the awesome beach parties
8. you will have PCD (Post-Cruise Depression) symptoms afterwards
9. you will tell stories about the cruise to your buddies at home for weeks on end
10. you will be totally useless back at work because you are too busy checking Facebook and looking at pictures from the cruise - true story!

and last but certainly not least and most importantly
11. you will make friends, which will probably last for a lifetime

So, now that this is out of the way, if you are interested to learn more about the cruise, you are now cleared to keep on reading.

The nitty and gritty of 70000 Tons Of Metal is actually pretty straight forward. 2016 will be the 6th Edition of this 'floating festival' and the organizers also brought us Barge To Hell in 2012; a more harder, extreme version of the original concept. Gee, 6 years and no sign of slowing down. Holy … Moses !! LOL - sorry on the word play, but I just was notified on Facebook that Mrs. Classen and Co. will also be part of the 2016 spectacle. Nice!

Anyway, the story of Andy Piller, mastermind behind the concept of 70000 Tons Of Metal, should be well known by now. In case you lived under a rock, or honestly never heard of the cruise, either check out the interview he did with Metal Storm a couple years back or - hmmm, well … Google is your friend.

From the inaugural voyage in 2011 and ending with the 2014 cruise, the festivities were always held on Royal Carribean's her Majesty Of the Seas; leaving from Florida's Port Of Miami en route to a tropical destination and back - 4 days, 40 bands, 2000 metal heads. In 2015, organizer Ultimate Music Cruises Inc. upped the ante and moved 70000 Tons Of Metal to the Liberty Of The Seas; a much bigger ship which sailed out of Fort Lauderdale's Port Everglades.

While the duration of the cruise stayed the same, this move meant an increase of bands and passengers - 60 bands instead of 40 and 1000 more metal heads had the opportunity to experience this, for some, once in a lifetime trip. Unfortunately, the same vessel won't be available for 2016 due to moving its Port Of Departure to Galveston, TX.

Keeping with the tradition of leaving out of Florida, the next 70000 Tons Of Metal cruise will therefore take place on another Royal Caribbean's Freedom Class cruise liner; the Independence Of The Seas, which is basically the newer sister ship of the former. 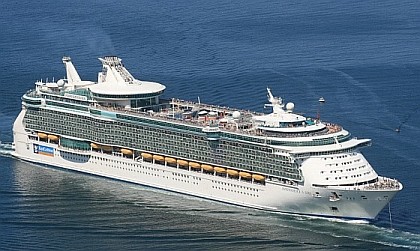 Independence Of The Seas In All Her Glory

Glancing into the details of the new ship, I found only a couple differences compared to the old one: there are less slot machines and card tables in the Casino, and the Theaters, Clubs and some of the Bars have different names. In essence it's the same ship and since I already wrote about its features at the beginning of last year, you can read up on it yourself.

Too lazy to read the article? OK, here is a quick rundown on the venues only, for the rest of the ship's features you just have to click the link.