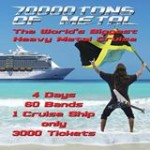 The 5th edition of the 70000 Tons Of Metal cruise already promises to be even bigger and better than anything else the organizers have done before. And even though I barely got rid of my sea legs, it's time to get stoked for next year's cruise. Stoked why, you might ask. Simple. Bigger ship, more bands, more people = more fun!

Andy Piller, 70K's Skipper states: "I want to make sure the intimacy between the bands and the fans does not change in our new environment. When we had 2000 cruisers we booked 40 bands. Now we will have 3000 cruisers which means we will be inviting 60 bands to perform!"

Since their inaugural voyage back in 2011 a lot has changed in the "floating music festival" environment. These days, the consumer has several choices in regards on which music themed cruise they want to spend their money on. Seriously, there are cruises for just about every genre of music and not just here in North America, but now in Europe as well. So, what makes 70000 Tons Of Metal oh so special? One word: variety.

I am not dissing on the other cruises out there, but 70K organizer Andy Piller and his crew at Ultimate Music Cruises Inc. created a very unique and never before attempted floating festival which, in hindsight, DID set the standards for other cruises that followed. Back in December 2012, during their off-brand cruise Barge To Hell, I interviewed Andy about how his vision of the cruise came to light and I have to say not much changed from the original format. I guess this is the reason why this year's band announcements sport a "The Original" disclaimer on the logos. Well played.

Ok, variety. While other music cruises somewhat cater to a specific audience when selecting bands for their events, 70000 Tons Of Metal stayed true to their unique formula, with inviting not just the "cream of the crop", but unknown bands as well. Take their maiden voyage as an example where Amon Amarth, Blind Guardian or even Marduk played alongside bands such as Cripper and … Duskmaschine. Who? Seriously, unless you are a total metal aficionado (or live in a region where those two actually play gigs) you probably have never even heard of them. And this is very appealing to most of the 70K cruisers - discovering new bands while also enjoying their favorites. But, but - but other festivals do this also. True, but those are land-based festivals; your point is invalid.

left: The Egyptian themed SPHYNX lounge, which offers a more intimate local club atmosphere and after midnight will host the legendary Metal Karaoke - right: STUDIO B, normally the ice skating rink but transforms to give you a compact version of the classic arena concert experience

There is also no clear headliner on the cruise and the bands are listed alphabetically on the line-up page for the event. Of course, some bands do play a 90-minute set, but even the smallest unknown band still gets at least their 45 minutes worth of fame; no 20-minute "wham bam thank you ma'am" crap. But, but - with that many bands I will have to pick and choose who I want to see. Not really, since each and every band will play TWICE during the cruise you will have the opportunity to actually see them all. In all fairness, with 60 bands scheduled to perform, I don't know how this will pan out in regards of overlapping shows.

What else makes 70000 Tons Of Metal special? The atmosphere! We all have been to festivals (day gigs or otherwise) where the amount of douchebags were just astonishing; right? Not so on 70K. The cruisers, even those drunk to no avail, were the most behaved bunch of metal heads I have encountered in years. No drama, no fights, very little stupid stuff (*cough* except Calvin in 2014 *cough* - inside joke, those who were there know what I mean

But all kidding aside, this is the most civilized metal festival you will ever attend; including the mosh-pits. Yes, while some music cruises might have a disclaimer such as "… to ensure the safety of all guests, no moshing, crowd surfing or stage diving will be permitted …", there are no such restrictions on 70K. I don't think stage diving is such a big concern since there are barriers and I honestly never witnessed it, but moshing … come on. Yeah, stand still in the pit now will ya during Kreator's "Extreme Aggression".

But then again, some of the other cruises feature more "radio-friendly" bands, where moshing might not be the preferred activity - kum ba yah and stuff I guess.

left: PLATINUM THEATER is a five-storied concert hall and they will remove part of the (very comfortable) seating in the front; what's a heavy metal show without the possibility of a mosh pit - right: POOL DECK stage will be surrounded by several bars and pools and even hot tubs will be incorporated into the stage so you can soak while watching the show

Another great feature is that there are no backstage areas for the artists. No special pass is needed to get an up close and personal glimpse of your "idol". You will see them enjoying the cruise just as much as you and most of the artists also partake in the after-hour Metal Karaoke shenanigans.


What else? The accommodations! Not having to stand in ankle deep mud or looking like a wet dog after Mother Nature decided to open the floodgates. (Unfortunately, rain happened on the 2014 cruise and the outdoor shows were simply moved to the indoor theaters.) You can actually get away with wearing flip-flops during the entire cruise. But just in case you want to change your outfit, you don't have to go to your car (if you are even allowed to leave the festival site) or make the mile long track to your campsite since your room is right there. And speaking of rooms, since the Liberty Of The Seas is a much bigger ship, the staterooms are not only bigger, but there are also more rooms with balconies - nice!

Other than the awesome accommodations, your culinary requirements will not only be met, but will probably exceed your expectations. No overpriced hot-dog or hamburger and definitely no "let's go to the tent and warm up the grill so we can eat" scenario; the ship has something for everyone. Be it the buffet style restaurant, the 24hrs pizza at Sorrento's, a sushi-bar, a steak house, a fine Italian dining place or the formal a-la-carte restaurant, just to name a few. Oh, and "formal" on 70K means - preferably a shirt, pants and shoes; no suit or tie required.

Sounds good so far? Well, there is more, much more. Since the new ship is also a lot faster than the prior one, new and exciting destinations lie ahead. For 70000 Tons Of Metal 2015 this destination will be Ocho Rios in beautiful Jamaica. But before you scream in excitement about the "obvious"

, let it be known that Jamaica's laws are even stricter when it comes to "ganja". So, don't be "that dude" since there is so much to do and see in Jamaica otherwise.

ROYAL PROMENADE AND SHOPS - a naturally lighted four-story area lined with bars and shops, is the heartbeat of the ship

The organizers always said that you might "need a vacation after this vacation" and those words are not to be taken lightly. There is so much stuff to do on the cruise and with next year it being on a new ship, the "wow" factors will surly increase. For an overview of what the ship has to offer click here, but in a nutshell: the Liberty Of The Seas has a Royal Promenade, which has an indoor mall type vibe, and is home to many of the bars and eateries on the ship. There is even a Vegas-style casino handy for those feeling lucky. In case you want to stay in shape while on board, there are plenty of fitness choices. Other than the pools and a huge gym, there is also a basketball court, a rock-climbing wall, a miniature golf course, a boxing ring, and last but not least for those who want to try their skills, a surf simulator on board. This alone could get interesting

OK, what else? Oh yes, bands, there WILL be bands playing as well.

As of today there have been 16 out of 60 bands announced and so far the line-up is not that shabby. Click here for the list of bands scheduled to play on 70000 Tons Of Metal 2015 and make sure you check back often for the latest additions.

Enough with the babbling. Public sale for the cruise already started and if you think this might be something you would enjoy, then stop lollygagging and get your ass over to their booking site. Some cabin categories are unfortunately already sold out, but if there is a will, there is a way. Check out the Official Forum page where folks, just like you, are looking for a cabin mate. 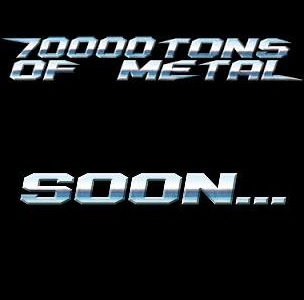