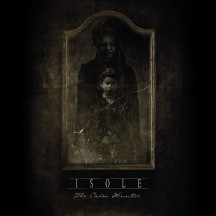 
The Calm Hunter meanders as it seeks out more melodious terrain for Isole's doom metal. This decision brings with it an inconsistency in the catalogue of the Swedes, who have maintained a style of their own under the Isole name ever since their debut in 2005.

It's only to be expected that Isole are associated with the predominant influence of Candlemass in the Swedish epic doom metal tradition, although it's just as easy to recognise that they've pursued a sound of their own on record. Such is especially apparent for this outing, as it departs from a more deeply ingrained doom and opts for album with increased tempo and a more melodic nature. This new nature, as well as the introducing of death growls into their music as taken up in the previous album Born From Shadows, would see a variation of the style they've performed to a consistent calibre since Isole's inception. With the band signing under Cyclone Empire for this effort, a new focus on melody is foundational in the approach taken, demonstrating that they're quite capable of instigating change and development, rather than wearing out the same old routine from album to album. It's clearly not as significant a progression as the genre jumping that the initially comparable American band While Heaven Wept have undertaken in recent years, but it is enough to qualify as an active attempt to modify their song writing, while maintaining their identifiable characteristics.

In writing the track-list for The Calm Hunter, it's as if the band has forgotten to revert back to fully fledged doom out of the frame of mind with which the recently studio active sister band Ereb Altor is realised. The direction taken therein would seem to have had some effect on the proceedings here, as the record is quite noticeably lifted from the slower and more encompassing sense of atmosphere of Born From Shadows and fulfils the "epic" classifier in brisker fashion than usual, still finding the expected distinctive placement and emphasis of clean vocal arrangements.

The structures are presented in a more hurried manner with the activity of a busier rhythm section overall than on many of the efforts preceding, and, consequently, it departs noticeably from the usual Isole sound. Without adequate pacing as would befit Isole's usual doom crafting, the songs proceed with little grip and emphasis on mood such as was mastered in records like Throne Of Void. More gradual segments and guitar lines do arise which reintroduce the band's typical style of song progressions, but there is a meandering melodic input here which carries many of the tracks along at a generally quicker pace and an unfortunate lessening of the doom vibe as a result.

Some of the tracks would retain the doom of old despite the all inclusive melodic approach, such as in "Perdition," but otherwise the majority of the record takes up an inconsistency in a more up-tempo delivery than is typical for the band. Coming off the well realised approach in Born From Shadows, this latest album is unfortunately lacklustre and presents an effort that pales in comparison to Isole's earlier material. Granted, the decidedly melodic attempt does find points of recollective worth, such as in the two part "The Destroyer" sequence, which manages to somewhat redeem the record and conclude it on a more commendable note.

Otherwise, The Calm Hunter ultimately fails to find its target, and isn't among the band's best recordings.