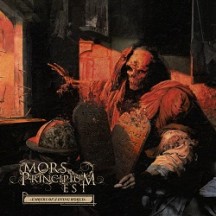 
Mors Principium Est is at the core a Gothenburg metal band from Finland with a duo of killer albums released in the early 2000s, Inhumanity and The Unborn. Yet their front man Andy Gillion is from the UK. He took over songwriting and guitar duties when the band was on the brink of being dissolved in 2011. He carried on the legacy with Ville Viljanen [vocals], Mikko Sipola [drums] and Teemu Heinola [bass]. This Mors Principium Est v2.0 has been thriving under his astute vision and vista. 2014's Dawn Of The 5th Era was an immense album. After following religiously the hilarious studio diaries from Andy and crew on YouTube, I finally have in my figurative puny hands a digital copy of Embers Of A Dying World. Picture me excited.

My first impressions came with the painted artwork. It is dark and tasteful, appropriate for a melodic death metal record. I had beforehand feasted on their single "Reclaim The Sun", which I considered to be on par with the awesomeness featured on their previous opus. Interestingly enough, structure-wise this album is very similar. There was no need to change a winning formula.

My main concern delving into this was about the loss of their second guitar player Kevin Verlay, who I thought added a nice balance to Andy's furious approach to writing and handling the instrument. However, my concerns were quickly put to rest. It turns out that more Andy Gillion is exactly what this band needed to set Embers Of A Dying World as its own thing of beauty. The guy is a true artist, with all the intensity and quirkiness that come with it. His guitar work remains very creative and mind-blowing technically. The way he brought keyboards, female vocals and violins into some of these songs is masterful.

Ville's growls and vocals are top-notch as usual. His interpretation even through growling is what sets him apart from most vocalists. This is ever so true here. Mikko and Teemu have lost nothing of their brilliance. They do provide the extra power and control that these songs need.

This album has a greater variety of influences than their previous works. While "Reclaim The Sun" feels like a logical evolution, "Masquerade" and "Into The Dark" have a dark melodeath vibe, think Edge Of Sanity. "The Drowning" feels more modern a la Dark Tranquillity. The splendid "Death Is The Beginning" has some definite Draconian and Insomnium elements. The list goes on as the tracks unfold. This is like an ode to the melodic death metal style as a whole.

If the world is indeed dying, at least we have this opus to reflect on it. Mors Principium Est strikes again with a juggernaut of melodic death. It is as compelling as Dawn Of The 5th Era with maybe a darker edge. Embers Of A Dying World continues to feature some premium inspired Gothenburg metal crafted in the true spirit of the style while incorporating many modern touches.

Written on 09.01.2017 by
Dream Taster
Bringing you reviews of quality music and interesting questions such as: