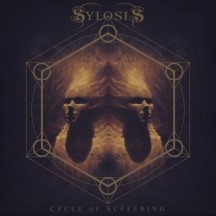 
Do the Germans have a word for "very glad this exists but also a bit disappointed"?

In the past year since I've started doing regular reviews for MetalStorm, I've had the pleasure of fawning over bands I love putting out great new albums, as well as letting loose on massive disappointments from longstanding favourites. However, it's the ones where my feelings fall somewhere in between that are harder to write about. Anyone who has seen my forum profile picture or read my end-of-decade list will appreciate the level of esteem I have for Sylosis; therefore, it will come as a surprise to no one that Cycle Of Suffering, the group's first album in half a decade following a hiatus, has been massively anticipated by myself since it was first announced in December. Less than two weeks and a couple dozen listens later, I'm still trying to decide exactly how I feel towards it.

For those not previously acquainted with Sylosis, the group started off as something of a thrash/metalcore hybrid; however, 2011's Edge Of The Earth, the first with lone surviving original member and lead guitarist Josh Middleton on vocals, saw the metalcore elements substantially diminished, with their signature dark melodic thrash style truly emerging. The neckbreaking, twisting thrash riffs, epic melodic tendencies and varied songwriting made Edge Of The Earth and successor Monolith some of my highlights of the past decade, musical or otherwise. A lot of these elements remain in place on Cycle Of Suffering, and yet there is considerable contrast between this latest record and its aforementioned predecessors.

One thing that I noticed right off the bat is the vocals; Middleton has come on leaps and bounds in his near-decade as a frontman, and his impressive harsh-yet-tonal vocals sound fiercer and more controlled than ever on Cycle Of Suffering. Another thing that stands out immediately is the tuning; a band that has long hailed the virtues of E standard has downtuned for D standard for their latest offering. This shift may just be to add a darker sound to a "we're back and angrier than ever" comeback record; however, when combined with other features on the record, it feels more like a shift towards appreciating/incorporating aspects of 21st century metal to a greater degree.

Opener "Empty Prophets", which has emerged as a favourite of mine on the record, begins with a frantic tech-y riff before kicking into a typical thrashy chug; however, less than a minute in, and we're headbanging along to a chuggy breakdown, the first of many on the album. Breakdowns aren't new to Sylosis, but they decreased in prevalence as albums went by, only to re-emerge on Dormant Heart, and now in a big way here, especially on late album duo "Arms Like A Noose" and "Devils In Their Eyes". The latter of these also features a relative novelty for the band; Gojira-esque pick scrapes. I feel like Gojira were probably a notable influence on this record, and like them, Sylosis have increased the prominence of semi-melodic grandstand choruses on Cycle Of Suffering (see "I Sever", "Shield", "Invadia" and more for examples). It's possible that Middleton's time playing in metalcore heavyweights Architects has informed on his songwriting, but combined, these various elements distinguish the record from the more classic aspects of Edge Of The Earth.

Whether or not these additions or revisions to the band's sound are beneficial will be up to personal taste; however, one issue I do have with Cycle Of Suffering is how invariant it can feel at times. "Arms Like A Noose" and "Devils In Their Eyes" somewhat encapsulate this as back-to-back breakdown-fests, but the verse/chorus-dominated vibe of the stretch from "Shield" to "Idle Hands" also leans into this. My personal favourite album from the group, Monolith, seamlessly covered more classic thrash ("Out From Below"), more sludge/post-oriented territory ("What Dwells Within"/"Behind The Sun"), atmos-black elements (the title track) and more within its first half alone. In contrast, the twelve songs on Cycle Of Suffering often struggled to distinguish themselves during my first few playthroughs of the record. It also doesn't help that some of these anthem-oriented choruses ("Shield", "Invidia" and "Idle Hands" in particular) fall slightly flat for me compared to previous attempts such as "Empyreal" and "Mercy".

Yet, as negative as that last paragraph comes across, there's a reason I've been able to power through so many replays of the album, namely that I really enjoy it. The aforementioned "Empty Prophets" covers a substantial amount of territory in 3 minutes; after the breakdown, it transitions through several meaty riffs before reaching a fistpumping climax. Songs with similarly satisfying conclusions are the title track and "Idle Hands", both of which summon some of that epic melodic feel that made various songs on past records so undeniable, and the latter of which features a trademark sweeping guitar solo. Another standout song is "Apex Of Disdain", featuring a gnarly main riff and a breathtaking midsection that is arguably the highlight of Cycle Of Suffering. Last, "Abandon" builds upon Dormant Heart's closing song "Quiescent" and further expands the band's ability to convincingly delve into softer territory, as well as showcasing Middleton's increasingly capable (if hardly stellar) clean vocals.

Overall, I'm at a bit of an impasse in terms of how I feel about this record. On the one hand, my infatuation with their prior work may be leading me to judge this new album overly critically, and the swathes of overly positive reviews and enthusiastic comments here and elsewhere may be testament to that. On the other hand, my opinion of the record has improved with extensive repeat listening, listens that the album likely would not have received if it was by any other artist. As it is, Cycle Of Suffering is a strong return from Sylosis after their hiatus, and hopefully marks the beginning of another period of sustained activity; however, it somewhat knuckles down on aspects of Dormant Heart that see the group move further away from what so profoundly drew me to them in the first place.

Written on 19.02.2020 by
musclassia
Hey chief let's talk why not
More reviews by musclassia ››