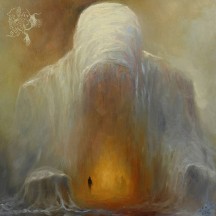 When I first discovered Abigail Williams, they had Legend and In The Shadows Of A Thousand Suns under their belt, the former an EP that if pressed I would describe as 'blackcore', and the latter a symphonic black metal album in the vein of Cradle Of Filth. This decade, they've since dabbled with meloblack (In The Absence Of Light) and atmospheric black (Becoming), and whilst I hugely enjoy both of these records, the band has received fair criticism for lacking a clear identity (or, more harshly, for being bandwagon jumpers). 2015's The Accuser, a harsh, somewhat psychedelic album, was another stylistic jump, but felt more like a band searching for its own distinctive voice. Now, after a 4-year gap that involved frontman Ken Sorceron joining (and in the latter case, subsequently quitting) Lord Mantis and The Faceless, Walk Beyond The Dark has arrived, and it feels like the culmination of a decade-long search to find the 'real' Abigail Williams.

Walk Beyond The Dark takes aspects of the various different faces Abigail Williams have worn this decade, but delivers its own distinctive sound. "I Will Depart" is, if anything, closest to In The Absence Of Light, a measured, semi-melodic opener that is willing to unleash the blast beats, but which is less reliant on them than the at times overwhelming The Accuser. This song offers up some memorable riffs to get the neck moving, such as the rolling groove during which the song title is shrieked, and conjures a general ominous sense of impending peril, really announcing right off the bat how vital this latest incarnation of the band is. The closing moments of this song also reveal a new feature this time around; clean vocals, which unless my memory is failing me haven't previously popped up in any of the band's previous work. In this first instance, they are only wordless chants, but the next song, "Sun And Moon", features actual singing, and whilst Abigail Williams aren't going to redefine clean black metal vocals, they fit nicely into and enhance the songs in which they feature.

The frantic verses of "Sun And Moon" are amongst the moments on Walk Beyond The Dark that feel closest to The Accuser, but the tom-driven midsection of this song takes the song in a different direction, and the combination of cello with black metal tremolo is more reminiscent of the use of violin on Becoming. "Sun And Moon" is also one of the shorter songs on Walk Beyond The Dark, which features two tracks that break the 10-minute mark. These two songs, "Black Waves" and "The Final Failure", are arguably the standout cuts from the record. "Black Waves" opens with some sombre cello before segueing into a delicate clean guitar section, almost feeling like it could've been part of a metal version of a Lord Of The Rings soundtrack. This eventually gives way to heavier sounds, but the whole song is a carefully executed atmos-black epic featuring a captivatingly gloomy clean vocal midsection, a mesmerizing synthesis of black metal, sorrowful voices and tastefully integrated cello. "The Final Failure", on the other hand, is the closest the band gets to the string-dominated atmos-black of Becoming, and offers the most accomplished infusion of violins/cello and black metal delivered on Walk Beyond The Dark. Compared to the uplifting tone of the similarly string-dominated "Into The Sleep", this is morose and pessimistic, a proper successor to the awesome "Beyond The Veil" from Becoming, and yet it finds the time to fit in an unexpected but satisfying guitar solo, a rarity for the band.

Whether Walk Beyond The Dark is the best work of Abigail Williams is up for debate; however, this is the album of theirs that most feels like it represents the band's vision, combining the strings and atmosphere of Becoming, the aggression of The Accuser and the meloblack riffing of In The Absence Of Light to deliver something that sounds truly their own, rather than an homage to Wolves In The Throne Room or Cradle Of Filth. It may be that the next Abigail Williams album will be yet another big departure, but if there was ever a time to focus on refining a sound rather than completely replacing it, this seems as good a time as any.

Written on 17.11.2019 by
musclassia
Hey chief let's talk why not
More reviews by musclassia ››