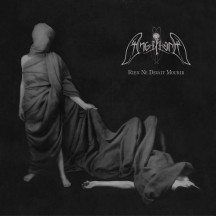 
Angellore was born in 2007, when Walran read a review that Rosarius had written for the album Veronika Decides To Die in some random French webzine. The two musicians met the same year in person and formed a gothic doom band that, since the Ambrosia demo, has significantly evolved.

Rien Ne Devait Mourir is, according to Angellore, "the darkest, most symphonic and ambitious work of the band to date". That statement is not far from the truth, since this album features a choir, as well as many guest musicians playing traditional instruments, such as flutes, celtic harp, cello, violin, organ, grand piano and oboe. All these tricks up their sleeve are presented by Angellore from the get-go with their courageous decision to start the album with a 20-minute opus. And the word 'opus' is totally justified because "A Romance Of Thorns" is undoubtedly their richest composition to date, opening with chorals recorded at L'eglise St Michel & St Barthélémy, and featuring sombre guitar melodies, mixed with more aggressive riffs, folksy passages, and a variety of vocals - harsh, clean and female ones. In fact, having three vocalists elevates the band's beautiful compositions even higher and makes the music more atmospheric and emotional.

It is very hard to show all your cards from the beginning and keep the listener interested for the rest of the album's runtime, but the flute playing and the tremolo picking on "Dreams (Along The Trail)" are both too magnificent for words, and the straightforward gothic rock "Blood For Lavinia" is the catchy tune that Idle Hands would have killed to have on their debut last year.

If I could voice a couple of complaints about this album, these would be the lack of some self-editing ability shown by the band on one hand, and the occasional overload of ideas and sounds on the other. Both observations are maybe explained by the fact that Rien Ne Devait Mourir was written between 2009 and 2016, while the recording sessions took place between 2016 and 2018. Even though the music quality is such that you rarely find something similarly good these days, the fact remains that this album is over an hour long, and if you get the vinyl version, which features two more tracks, it is a lot longer. Some songs could have been trimmed a bit, especially the heaviest cut, "Drowned Divine", although it does have one of the album's most spellbinding moments in its middle section. At the same time, "Que Les Lueurs Se Dispersent" feels like different songs that have been sown together and is made of great individual parts (the drum beats and the bass that evoke The Cure, as well as the fine marriage between male and female vocals) that unfortunately make a somewhat disjointed whole.

The clear influence of bands like Saturnus, Draconian, Empyrium, Uaral, Shape Of Despair, and While Heaven Wept does not mean that this is your average gothic doom project. Angellore's music is certainly sad and melancholic, and there is also this romantic bittersweetness that characterises the style but it doesn't come across as cheesy at all. It is mournful but not crushing, and it is so expansive due to the variety of the instruments used and the nature of the songs themselves that it will keep you emotionally attached despite its prolonged duration.

"How I wish to run, how I wish to escape
Leave away my human husk
See it crumble to dust and disappear
While my spirit flies above the smoking pyre
Finally free from unfulfilled desires"