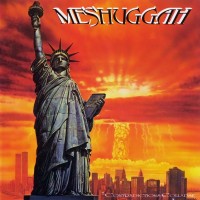 
Meshuggah were not always the djent-inspiring band they have come to known as; here in their nascent early days the band sounded a lot different and... a lot better.

Brace yourself as I commit metal blasphemy and tell you all how Contradictions Collapse is my favourite Meshuggah album. Now I know this is album is often treated as a black sheep in their catalogue but that is not for any lack of quality. Seeing the nascent technical soundings that would later be built on and come to define Meshuggah blended with the aggression, aesthetic and template of technical thrash, the end result is a unholy conception that will knock you sideways. This does not disparage the quality of Obzen or Koloss but it offers a unique flavour different from what the band would go on to perfect, a snapshot in time that the band would slowly move away from.

Meshuggah are not quite the band they would come to be, still growing and very green, which is understandable given this is their debut release. At this point the band seem to be slowly extricating themselves from the thrash genre of which their early sound is devolved from. While the music on Contradictions Collapse is technical and not the straightforward blow between the eyes most thrash was, they sound more like a diluted Dark Angel ala Time Does Not Heal than a [band]Atheist[band], though with a heavy dose of Voivod mixed in for good measure.

"Qualms Of Reality" is probably the song that would be the most familiar to fans of the band's later work, with it sounding like a prototype of what the band would slowly evolve into, though sans the djent sound, with the structure and bursts of power being something the band would later build upon and replace the thick thrash-indebted riffs with thick downtuned groovier guitar parts. The introduction to "Choirs Of Devastation" would also point to the band's future sound, with its empathsis on tight rhythmic parts and how Haake would be able to handle tracks like "Bleed" done the line.

Nordin, Thordendal and Kidman bring wheelbarrow loads of riffs to the table for Contradictions Collapse and the songs seem to be built as a means of sifting through each of these riffs and crafting space so that they can find a spot to occupy on the tracks. With the average track length exceeding six minutes and often over the seven minute line, the band give themselves plenty of room to showcase their parts. Tracks like "Cadaverous Mastication" (bet Cannibal Corpse wish they'd thought of that title) and "Greed" are showcases of some great riffs that power the songs through their duration, which never stray into vehicles solely to exhibit the band's stringed talents, as riffs are included to the benefit rather than detriment of the song.

Kidman channels his now famous voice through what can best be described as an attempt to imitate James Hetfield, though where Hetfield would occasionally use barked vocals and focus on the melody, Kidman does the inverse of this; on "We'll Never See The Day", it gets to the point you await the "oh yeah", he strays so close to his style. Does this detract from the album? Not particularly, given the background against which these vocals are laid upon; also, the vocal structures are so different to Metallica that they put a lot of light between the two though with a knowing wink to each other.

The production is a mixed bag, everything is clear and audible, which is a feat given the intricacies that are part and parcel of technical metal, so props must be given to Rics for being able to establish order in what could have easily descended into chaos. The price that seems to be paid for this, however, is in exchanged for somewhat limp guitars and a snare drum that is way too high in the mix. This creates a level of coexistence whereby you can hear everything and focus on the parts you like but with the regular intrusion of the snare drum to break your concentration as you try to listen around it to hear what Thordendal and Kidman are playing. Try "Abnegating Cecity" and challenge yourself to be able to block out the snare.

So will this appeal to either Meshuggah or tech thrash fans? Well I think owing to being prejudiced by hearing the band's later more landmark stuff first, this will sound like a devolution to fans of the band rather than a stepping stone towards what they have likely heard first. If you are able to separate the band from what they would go on to do, then you will likely enjoy this album. If you are stoically held to the sound the band would later adopt then this is an album that will likely rub you up the wrong way, I would still recommend giving it a listen but it is unlikely to shift your position.

Written on 31.07.2020 by
omne metallum
Just because I don't care doesn't mean I'm not listening.
More reviews by omne metallum ››