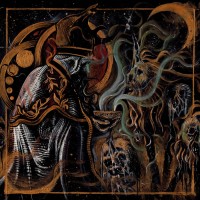 If you're asking yourself what the hell does "zeuhl" mean, I'll have to let you know that there are more types of 70s prog rock than just symphonic prog. Zeuhl is indeed one of the most obscure types, and even I barely only knew Magma at first. Which makes sense, since Magma pretty much invented the term, creating their own language from which that word is taken. But zeuhl isn't about singing in Kobaïan, even if it's hard to really put into words. It's uncanny but grandiose music driven by repetitive percussion, grand sections of stuff like choirs and horns, and either bursts of jazzy improvisation or trance-like grooves. Uhh... you know it when you hear it. Of course, there are more zeuhl bands than just Magma (even if Mëkanïk Dëstruktïẁ Kömmandöh is the only mandatory listen), like Eskaton or Dün or Weidorje. And it turns out that there's also this band called Yeti, whose 2004 album, Volume Obliteration Transcendence, mixed zeuhl and sludge metal even before Papangu did.

So now that we settled a bit what "zeuhl" is, and that this mix was previously attempted. Papangu are forward-thinking regardless, and the way they approach this blend is incredibly creative. Holoceno has been seven years in the making, but it doesn't really feel that overcooked, even if there is a sense of joy in the music as if they're happy to finally get it out in the world. But don't let this make you think that the music of Holoceno is really joyful. Apocalyptic might be a better term. But it's quite cosmic and surreal too, in a psychedelic avantgarde allure not too dissimilar from their countryman in Bríi. The entire atmosphere feels completely oblique, with the syncopation, colorful scales and repetition that helps give the zeuhl its uncanny feeling, but it's all merged into early Mastodon-esque sludge riffing, all with a production quality that is less punchy and more space-y.

Despite the lack of actual punch in the production, the heaviness still seems to seep through Holoceno's pores in its heavy moments. The sludge riffs fit incredibly well in the aestethic of the album, and especially in the spontaneity of the album's section changes. A lot of it bursts into saxophone jazz sections, while other times it builds space-like uncanny synth passages. The band manages to keep a pretty good balance of material that seems well thought-out and one that feels jammed, and even in it's most hyper-active moments, it never halts the momentum of the atmosphere building. Though the overall sound still remains in this blend that creates chaos and dread, there is a significant amount of variety in songs that are doomier ("Terra Arrasada") or more jammy ("Holoceno") or more chaotic ("Bacia das Almas"). I'm reminded of a lot of similar music while listening to this, from King Crimson to Ihsahn to Shining (NOR) to Kayo Dot, the latter making a lot of sense considering that Toby Driver does a remix as a Bandcamp-exclusive bonus-track.

So here's a pretty unique blend of progressive styles, with organic performances that are given time to build, a great sense of technical intricacies, and uncanny apocalyptic atmospheres. This is some proper avant-garde.

Written on 22.07.2021 by
RaduP
Doesn't matter that much to me if you agree with me, as long as you checked the album out.
More reviews by RaduP ››