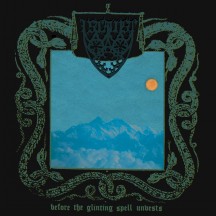 
A fantastic black metal album being almost slept over due to a surprise release in late December? Where have I heard that one before?

I was minding my own business. Getting ready to settle down with 2021. Figuring that the year will end with another mediocre Wombbath and start with a mediocre Mechina. Than suddenly there's an Ustalost album, and then I knew I had to pay some final dues to 2021. Ustalost's The Spoor Of Vipers seems like the very definition of a modern cult classic. A lone album steeped in the lo-fi sounds of the second-wave, particularly Burzum, but transcending the mere imitation of the form into a unique off-kilter demonstration of how to effectively create a raw atmosphere, and how to make both synths and bass have a big impact on the music. I do have to admit that I don't consider The Spoor Of Vipers as big of a masterpiece as some people hail it as, but I can absolutely see where they're coming from.

Ustalost is in an interesting position between one-man band and duo, as Will Skarstad is the one performing and composing all the music, whereas Sam Skarstad produces the thing and writes the lyrics. The brothers are also part of Yellow Eyes, a USBM band whose last album really impressed me, with its off-kilter songwriting and odd transitions. Ustalost and Yellow Eyes aren't very far apart, but Ustalost's use of lo-fi abrasiveness made it sound somehow more shimmering and straight-forward. Before The Glinting Spell Unvests finds ways to turn that on its head. Instead of sounding like a dark castle, it sounds like a dark castle in a dream. So if The Spoor Of Vipers was expansive, Before The Glinting Spell Unvests is that in spades.

Already in the sound alone there's a big shift in atmosphere. While clearly coming from the same school of lo-fi rawness, the approach is a bit more polished and spacey, but losing none of its rawness. The vocals no longer feel like they're exclusively blood-curdling shrieks, but they're peppered with choirs and yells. And the larger palette is felt in the songwriting too, even though there aren't like any new instruments or influences woven in, the way the bass acts as a counterpoint to the guitars has been one of the best features of The Spoor Of Vipers, and that is enhanced here. Bass, keys, and guitars all work in tandem and they never have to fight each other for their pace in the mix, with the synths also being more integrated within the sound rather than given many solo moments.

A lot of what works about Before The Glinting Spell Unvests is that it is an album that resolved all conflicts with itself. It found a way to sound more accessible without sacrificing its rawness. A way to expand the vocal palette without sacrificing the blood-curdling nature of the vocals. A way to make all the instruments work in tandem without one eclipsing the other. A way to make the experience dissonant but have the melodies constantly creeping in. And most importantly, a way to sound even more like itself even without the modern cult classic label attached to it... yet.

Written on 03.01.2022 by
RaduP
Doesn't matter that much to me if you agree with me, as long as you checked the album out.
More reviews by RaduP ››