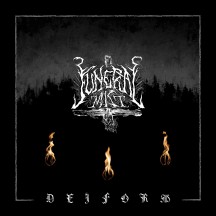 
This is why you wait till the bitter end before listing the best albums of the year.

As per custom with the label Norma Evangelium Diaboli, there was an announcement about Funeral Mist’s latest opus merely a week before the release date. No promotion is required for this project though. Anyone remotely interested in the Swedish black metal scene should be aware of the impressive catalogue of Arioch. Years ago I feared that his role as the vocalist of Marduk would impair his time, but he triumphantly returned with Hekatomb. The project’s third album arrived in 2018 after almost a decade of absence and proved to be a fierce endeavor. The dust has barely set in and my bleeding ears have already been blessed by a new album in just 3 years. I’m thrilled to tell you that Deiform once again sees the venomous Funeral Mist as one of the most formidable acts around.

How can I properly express the fascinating atmosphere behind this record? It’s all in the dangerous take on fanaticism, really. It’s in that deranged desire to take the most beautiful and pure musical elements and twist them into blasphemous madness. The oppressive darkness is palpable through the liturgical choirs, the relentless riffs and blastbeats, the psalms sung by children, and the melodic lead guitars. Everything is thrown into a depraved filter and it is seriously addicting.

As soon as the commanding voice of Arioch appears you know you are in for something special. His tongue is poisonous and sounds as a madman puking hatred unto the world. Odd vocal experimentations have been used before in previous albums. Deiform may not be the album with the most bizarre vocal performance by Arioch, but he surely remains very convincing. From his maniacal howls, to clean vocals that verge on demonic possession or to disturbing throat singing. But that was already known to most of you. It’s the songwriting itself that has reached new heights. This might very well be Funeral Mist’s best album since Salvation, if not the very best. There are many highlights that serve as testament to the meticulous songwriting at play here. The solemn choirs of men and children in “Twillight Of The Flesh” and “Children Of The Urn” are so well placed you’d think the samples were made for these songs exclusively. The latter of the two is a true gem among the project’s discography. It ends with such a melodious, catchy yet thundering riff that it bleeds heavy metal passion.

Do not despair, seekers of chaos. Most of the album does carry the furious tremolo riffs the project has always been known for. Tracks like “Hooks Of Hunger” and specially “Apokalyptikon” display such a graphic abuse towards the guitars that I can only remain speechless as the songs unfold. The drumming has once again been handled by session musician and former Marduk drummer, Lars Broddesson. Just like with the previous two Funeral Mist offerings he has worked on, his performance is stellar. It is frighteningly fast to the point that I can’t be convinced that there is a human behind the kit in the final track “Into Ashes”. Here the cymbals shake with such fervor that it sounds like a rattlesnake ready to strike. The constant hiss and tumult by the end of the album seems to go on forever with a pulsing, monotonous sound. It is a drone-like dirge that grabs the listener and throws them into a deep abyss. Forever gone. Forever in darkness.

I’m aware I’m like a broken record praising this album so much. It is fitting however, considering I will end up breaking this record with so many replays. Deiform is one of the most inspired metal albums of the year and you deserve the right to finish off the year with this chaotic masterpiece.