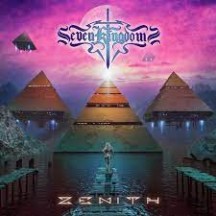 
It’s a bit risky using terms such as ‘zenith’ to describe an album presumably intended not to be the last in your career; if the title becomes a self-fulfilling prophecy, it doesn’t leave you with much opportunity to progress afterwards. Therefore, it’s perhaps a blessing in disguise that Zenith is not the zenith of Seven Kingdoms.

There are occasional curious coincidences that pop up on the release calendar, such as Sólstafir and Katla. releasing albums on consecutive weekends. In another instance, I reviewed an album last week from Seventh Wonder, and in my review, I mentioned that I thought Tiara was one of the best power metal releases in the 2010s. Well, seven days after The Testament’s release, listeners will be exposed to the latest album from another band with a name beginning with ‘seven’ that released one of my favourite power metal albums of the last decade.

I became aware of Seven Kingdoms in 2012 with The Fire Is Mine; yes, the name is an A Song Of Ice And Fire reference, and several songs on each record are lyrically inspired by the series, but that wasn’t what warmed me to them, not least because I didn’t even start watching Game Of Thrones until a year later. Instead, The Fire Is Mine impressed me due to the consistently high quality of the songs throughout; this was a US power metal album, meaning that it avoided some of the cheese overload that Europower peers can be guilty, but nevertheless was packed with exciting riffs and memorable melodic hooks, pretty much every track delivering killer rousing choruses (hell, even the ballad was pretty great). A decade on, and there’s a very select few pure power metal releases from the 2010s that I hold in similar esteem. However, this isn’t the 2010s anymore, and Seven Kingdoms’s follow-up, 2017’s Decennium, while still having some of the charm of The Fire Is Mine, made nowhere near as strong of an impression, so it falls on crowdfunded fifth full-length Zenith to replicate that spark.

One of the key strengths of The Fire Is Mine was the vocals, and since Sabrina Valentine is still behind the mic, that strength remains here. She doesn’t have quite the same immense power as someone like Triosphere’s Ida Haukland, but instead, in addition to a great ear for effective melody, there’s a warmness and passion in her singing that allows the band’s best songs to truly shine. Some of those best songs on Zenith include “A Silent Remedy”, “Empty Eyes” and “Magic In The Mist”, which between them show Seven Kingdoms working well at slow, mid-tempo and fast speeds.

Musically, Zenith mostly sticks to power metal territory; however, there’s a slight hint of 80s arena rock in opening track “Diamond Handed”, a hint that might make the arrival of “Love Dagger” slightly less unexpected. Still, “Love Dagger” is a peculiar oddity on the album; this is straight-up Van Halen - 1984 arena synth-rock fodder, and while some might be pleased with this, I quickly grew tired of it during replays. Perhaps if this approach was more consistently used across the record there would be some sense to it, but unless you’re counting the Joan Jett & The Blackhearts cover at the end of the album (which, like a lot of album-closing cover tracks recently, seems like it should have been a bonus track), there’s nothing else here that replicates it. The hard rock fiends might get more out of “Love Dagger” and “I Hate Myself For Loving You”, but they’re both obvious skips in my eyes.

Beyond them, how does the power metal stack up to their previous efforts? Ultimately, this album is fine, but against the standards set by The Fire Is Mine, I think it’s slightly lacking; there’s very few moments here that I feel rival the highlights of that album, and the track that gets closest to that, “Magic In The Mist”, I’m less enthusiastic about than I’d like to be due to the clash between the (very solid) chorus and the central synth motif that come in immediately afterwards while carrying a different key and tone. This is not to write off the album; Seven Kingdoms know what they’re doing, including managing to put together another easily above-average power metal ballad in the form of “Valonqar”, and there are solid choruses to be encountered in the likes of “Universal Terrestrial”. There’s just an unfortunate combination of few killer moments and occasional instances of parts either underselling the rest of a song or just not fitting together.

Adding the above sentiments to my thoughts on the rocking cuts, and I feel a subdued recommendation is the most that I can give to Zenith. Seven Kingdoms are a clearly higher-tier US power metal band, and have already demonstrated that on past albums; I can hear signs of it here still, but I would be disappointed if this album actually comes to resemble a zenith compared with what follows it.

Written on 16.06.2022 by
musclassia
Hey chief let's talk why not
More reviews by musclassia ››