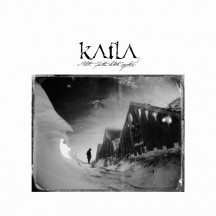 
Guðmundur Óli Pálmason's abrupt departure from Sólstafir offered plenty of drama back in 2015; however, in terms of musical output, this split seems to have been a productive one for Pálmason.

Following the split, Pálmason formed Katla. with multi-instrumentalist Einar Thorberg Guðmundsson, with the group releasing their debut full-length Móðurástin in 2017, only a few months after Sólstafir released their first post-Pálmason album (Bredreyminn). Although a direct comparison isn't entirely fair, with Katla. taking a heavier, darker approach than Sólstafir, I found Móðurástin to be superior to Bredreyminn. Three years later, both projects are releasing new albums within a week of each other, with Katla.'s sophomore effort Allt Þetta Helvítis Myrkur coming hot on the heels of Endless Twilight Of Codependent Love, and I have to say that for me, Allt Þetta Helvítis Myrkur represents a second victory for Pálmason over his former band.

As with the records released in 2017, Allt Þetta Helvítis Myrkur is a heavier beast than Endless Twilight Of Codependent Love, more deeply rooted in metal. In fact, I would say that it's also markedly heavier than Móðurástin; there are clear black metal influences in the guitar work at various points throughout the album, giving a real bleakness to the atmosphere of Allt Þetta Helvítis Myrkur. Other things contributing to the atmosphere here are the density of the riffs, the power of the percussion, and also some effectively employed background synths, all of which comes together nicely on early album highlight "Villuljós", as steady tom-heavy percussion drives the song forward through a measured build-up during its second half. The album is fine to give the synths a more leading role as well; both "Ást Orðum Ofar" and "Líkfundur Á Sólheimasandi" are predominantly ambient scene-setters, but whilst fitting two such tracks so early on could have hindered the momentum of the record, here, they work quite effectively in setting the tone on Allt Þetta Helvítis Myrkur.

In my review of Endless Twilight Of Codependent Love, I flagged the song lengths and vocals as the main issues I had with the album. Guðmundsson's vocals in Katla. aren't stellar, but by applying restraint in terms of the vocal arrangements, they generally work to the songs' benefit on Allt Þetta Helvítis Myrkur, adding grit and force to the brooding "Sálarsvefn", particularly in the moments when he pushes the intensity towards more extreme vocal territory in the song's symphonic black metal climax. As far as song lengths go, there are two tracks (the final two) here that shoot right past the 10-minute barrier, with all the others bar "Líkfundur Á Sólheimasandi" clocking in at over 5 minutes. However, the quality of the songwriting on display by Katla. means that even though the album runs longer than Endless Twilight Of Codependent Love, it doesn't necessarily feel long. The group know when to mix things up or to add new flavours to keep the listener engaged, particularly with their use of lead guitars, whether it's the melodic solo popping up in the midst of the punishing, trudging riffs that dominate the early passages of "Vergangur" or the slower, extended lead section later on in "Hvítamyrkur", arguably the most Sólstafir-esque song here, and one that highlights the heaviness that Katla. bring in comparison.

Ending with two hefty tracks in the way Allt Þetta Helvítis Myrkur does is a fairly bold move, but "Allt Þetta Helvítis Myrkur" and "Svartnætti" contain the quality to bring the album to a satisfying conclusion. The title track is predominantly atmospheric, moving between strings, isolated doom guitar leads, what sounds like hammered dulcimer and more before eventually sliding into doom metal riffs, but this extended instrumental opening manages to avoid becoming dull, and Katla. pull off the doomier sound in the second half very well. Add in "Svartnætti", a slightly lighter effort (at least in its first half) geared more towards post-rock with nice use of piano, and you have a well-balanced, varied and satisfying album from front to back.

Two albums in and things are going very nicely for Katla. so far; the duo are capable of incorporating an array of influences into a cohesive sound that delivers variety and quality. We'll have to see whether they can maintain this quality over time, but based on their respective outputs in recent years, I know I'll be far more excited for Katla.'s difficult third album than the next Sólstafir record.

Written on 08.11.2020 by
musclassia
Hey chief let's talk why not
More reviews by musclassia ››