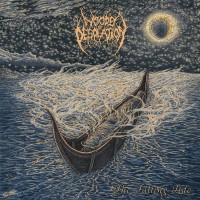 
So here it is: The Falling Tide, the fourth full-length installment by the well esteemed atmospheric black metal act Woods Of Desolation. Residing from the unlikely land of Australia, this dark atmospheric release has conveniently arrived just in time for the beginning of this dreary Dismal wintery season, and is perfect for reflecting on the depressively grim emotions that come with these wintery atmospheric settings. But does The Falling Tide provide the listener with the former majestic beauty the previous releases possessed?

If you're at all familiar with the band Woods Of Desolation, then you will most certainly be familiar with their epic, genre-defining masterpiece, Torn Beyond Reason, and for good reason. It's a release that incorporates blackgaze and post-black metal in the most perfect possible way, by introducing brief aspects of Alcest and Deafheaven into their style of music, whilst creating that densely thick blackened atmospheric soundscape. Although the band's third release, All The Stars, pretty much followed the same stylistic path of the previous album, it wasn’t to be as memorable, nor nearly as groundbreaking. Perhaps inevitably so, as it was simply a tall task to retain that overall majestic grandeur; nevertheless, it was a relatively solid release in it's own right.

Now, after an eight-year lengthy wait, the band has finally released their fourth full-length record, The Falling Tide, and exactly what is to be expected of this release? Well, maybe asking for an atmospheric masterpiece such as Torn Beyond Reason is asking for too much in this instance, but that's not to say this release won't disappoint you either. It does contain some of the former glory of their previous work, and yet again the band has shown that sticking to the post-metal/blackgaze theme is indeed a winning formula.

I must mention that Woods Of Desolation is mostly based on a solo project by multi-instrumentalist D; however, guest musicians have often stepped in to work alongside him on previous records. Here on The Falling Tide, D. takes over the vocal duties, providing his own raspy shrieks, as well as pretty much providing the whole instrumental layering, aside from a few minor compositions, so you could call this album his solo work effectively.

On the grand scale of things, The Falling Tide actually has quite a simple structure to it, as it solely focuses on long drawn-out riff patterns with the intention of building atmospheric soundscapes. These soundscapes are mostly themed around the subjects of nature and life, as the musician D. explores different aspects of his own spirituality, as well as the afterlife. His personal message is none more so clear than on the closing track "Anew", which is themed around the cycle of life and death, comparing it to the crashing of waves on the shore.

All sounds nice doesn’t it? On paper at least: however, there are flaws that prevent this becoming masterpiece material like that of Torn Beyond Reason. First, the quality of production could have been vastly improved on. The guitarwork is fantastic as usual; the punchy tremolo riffing works as effectively as it ever did before, with beautifully constructed melodies and a solid flowing rhythm. The post-metal elements are still clearly present and pleasant, and so too are the softer blackgaze elements. However, the drumming for me is a letdown; it has a real low-quality sound and repetitive beat that does become a nuisance over time. The songwriting overall is nothing to shout about either; yes there's a sense of passion in D.'s lyrics, and there are certainly some fine passages here and there, but I couldn't help feeling that there was a certain lack of inventiveness and unpredictability in the structure.

In conclusion, I have to say this is far from the best of Woods Of Desolation's work, from a musical point of view at least. However, perhaps looking at this from the actual musician's perspective will be a fairer assessment here, as it will shed light and understanding on this atmospheric piece; there is clearly a profound and personal theme at the centre of it all.