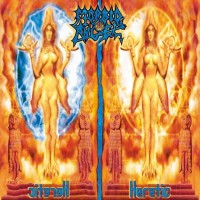 
Unquestionably one of death metals pioneers, Morbid Angel have once again returned to prominence with a new album, and to show all why their highly regarded influential reputation precedes them before anyone else on the scene. Keeping in line with Morbid Angel's alphabetical album titles, the three piece act's latest [and eighth studio album to date] goes under the name of ?Heretic?.

In the three since their last album [2000's ?Gateways To Annihilation?], the line up has been reduced to a three piece with guitarist Erik Rutan deciding to devote full time to his [now full time] side project Hate Eternal.

The combined forces of Trey Azagthoth [songwriter, guitars, guitar synthesizers and synthesizers], the return of Steve Tucker [vocals and bass guitar] and Pete Sandoval [drums, additional piano and keyboards] still makes for a powerful death metal noise, not to mention surpass some other recent releases from the group in recent times [most notably ?Gateways To Oblivion?].

?Cleansed In Pestilence [Blade Of Elohim]? is a mighty return to the old Morbid Angel sound with lightning paced drums from Sandoval, while Azagthoth's relentless speed riffing and innovative soloing is as eclectic and demanding on the senses as ever.

Next up is ?Enshrined By Grace? [which also happens to be the albums first promotional video clip] is steeped in demonic tones, while Tucker has mixed his vocal dominance with plenty of variation with different levels of ungodly sounding growls.

?Beneath The Hollow?, ?Curse The Flesh? and ?Praise The Strength? all utilizes plenty of distinctive old school riff elements, while ?Stricken Arise? and ?Within Thy Enemy? make speed the deciding factor for their solid metallic base.

Both ?Place Of Many Deaths? and ?Abyssous? offer brief moments of demented and harrowing sound effect interludes, while ?Memories Of The Past? and ?Vicious March Of Rain The Conqueror? are somewhat Victorian sounding with violin, guitar, piano and synthesizers providing the appropriate imperialistic sounding setting.

As the title suggests, ?Drum Check? is a drum sound check from Sandoval. Yes, it sounds good, but why it's included on the album still remains a mystery. Adding to the mystery is Azagthoth's guitar solo number ?Born Again?. Both tracks bring the album to a close, and not a strong one at that!

Whether or not you can figure out the loosely based numerology concept within ?Heretic? or not is neither here nor there. And if you take away the last couple of tracks from the album, you?ll find ?Heretic? a bold return to form from a band that wandered a little into the wilderness, but found the path in time before being lost forever.
Written by Justin | 22.09.2003