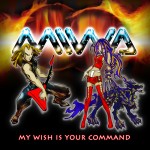 
Yep, that's the official album art for MIWA's My Wish is Your Command…

I'd be willing to wager that the person behind it is either a twelve year old or an avid Pokemon card collector. Currently leaning toward the latter, although both are probably true.

If you look past the abominable album cover and give the music a chance, though, there's a lot of respectable hard rock and heavy metal to be heard. The musicianship is solid, the songs are fun, the riffs are consistently good, blah, blah. I like it.

Despite featuring some biggish names like Bjorn Englen, who plays bass for Yngwie Malmsteen, and Chris Slade, formerly of AC/DC, the star of MIWA is undoubtedly Miwa, the Japanese femme fatale. The vocalist. Sure, her singing isn't wonderful, but her yelling is excellent, and she screams like a pro.

Miwa's versatile performance works well most of the time--she even belts her stuff out in Japanese for a few of the songs. That said, when she goes into ballad mode, she does stumble a bit. The slower, more singing-heavy songs are cloying enough to justify turning the album off prematurely. So that's a problem.

When Miwa blunders, however, she's supported by riffing and soloing that's, most of the time, nothing short of terrific. The guitarist gives the impression that he can simply feel good riffs--the impression that he doesn't need to spend much time reworking and honing his stuff. Their work seems to flow naturally. Only on a few occasions are toes stubbed and/or elbows poked out. But even the album's imperfections have a charming quality to them. I like metal that's rough around the edges.

But back to the questionable Pokemon reference: My Wish isn't quite a Charizard of an album. Not quite. But it's definitely a mid-level Charmelon. It'll melt a few faces and it certainly has no trouble clawing down many of the newer hard rock and heavy metal bands. Some of MIWA's songs make Airbourne look like a sickly, malnourished Bellsprout. They're more evolved and have more firepower than many of the throwback heavy metal/hard rock outfits around and they deserve attention.

Highlights: "My Wish is Your Command", "Kizu", and "Gimme What You Got".