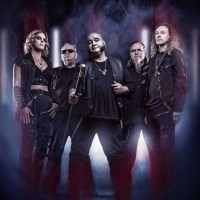 German gothic metallers Crematory have revealed more details about their upcoming album Infinity, to be released on January 29 2010. Here's what the official press release says:

"Lyrically and vocally Crematory use again English lyrics on Infinity but also two german tracks have made it on the album. The splitted vocals of Felix and Matthias, the extreme duel of clean vocals and deep growls surely was kept and even improved.

Crematory deliver hot fireworks of their catchy trademark tunes, topped with massive guitar riffing which turned out heavier and darker than on their previous albums. Gothic-Thrash-Metal is exactly the right description for this new masterpiece.

A cover tune can never beat the original - Crematory know that too but they already proved quality versions of Sisters Of Mercy's "Temple of Love" and Metallica's "One" in the past which undoubtly have their own characteristic sound.

For this reason the cover of Depeche Mode's "Black Celebration" made it on the album, which not only refers to the songtitle. Crematory turned this classic track into a Gothic Rock´n Roll track which will gain massive attention for sure and is set for another club hit for the band.

Infinity was once more recorded at the Kohlekeller Studios with Kristian "Kohle" Kohlmannslehner, who already did the chartalbums Revolution, Klagebilder and Pray with the band. Never change a winning team! Kohle as the band's producer again is a guarantee for a massive sound and an outstanding production with international standards. An album for infinity!

To present the album live to their fans the "Infinity over Europe" tour will be start in April 2010. In summer the band will play on several big open air festivals before the 2nd part of the tour will follow.

Afterwards the band will back out to work on their "Greatest Hits" CD and DVD which is set to be released in February 2011 celebrating the band's 20th anniversary. This one will include all the band's hits in picture and sound plus many specials and previously unreleased material."