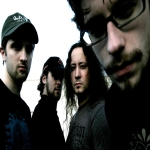 French metallers Lyzanxia have issued the following update on their official website:

"Hi Guys! We will release our fourth album - Locust - on May 31st 2010 through XIII Bis Records - Sony Music distribution.

Locust was recorded and produced by David and Franck Potvin between the Déclanché Studio (Switzerland) and the Dome Studio (France).

The album was mastered by Swedish master Björn Engelmann (Rammstein, Meshuggah, Behemoth...) who has this to say about the album: "I think it holds a very high standard all the way from the songs through recording and mix. A very good and powerful production"."