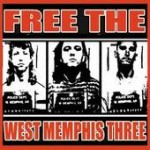 Metal band A Sound of Thunder has written and recorded the song "Justice At Last" for and about the West Memphis Three. The song is released on May 10th, available on iTunes and at all major digital music outlets, as a very special charity single benefiting the WM3. 100% of proceeds will go to the West Memphis Three Legal Defense Fund.

In 1993, shortly after three eight-year-old boys were found murdered in West Memphis, Arkansas, police arrested Damien Echols, Jason Baldwin and Jessie Misskelley and charged the three teenagers with murder based solely upon an error-filled and police-coerced false confession, extracted from 16-year-old Jessie Misskelley Jr. After 12 hours of questioning, without counsel or parental consent, mentally disabled Jessie Misskelley repeated back to the police what he was told to say.

There was no other physical evidence, no weapon, no motive, and no connection to the victims. Instead, prosecutors terrified and inflamed the shell-shocked community [as part of the Satanic Panic, ed.]. Jessie Misskelley recanted his statement immediately upon being released to his family, stating that the police forced, via threat and the lure of money, the story he told, but it was too late. Misskelley, Jason Baldwin and Damien Echols, known as The West Memphis Three, were arrested — then convicted of murder.

Stunningly, Jason Baldwin, 16 at the time and a model student, was sentenced to life without parole [according to wikipedia, prosecutors used Jason's Metallica t-shirts as evidence that he was involved in "satanic activity" and "the trappings of the occult", ed.]; Jessie Misskelley got life plus 40 years, while Damien Echols was sentenced to death. Damien has spent years in solitary confinement awaiting death by lethal injection for a crime neither he nor Jessie nor Jason had anything to do with. The West Memphis Three have been wrongfully convicted for crimes they did not commit.

A Sound of Thunder is a female-fronted heavy metal band from the Washington, DC area. Formed in 2008, A Sound of Thunder has toured the Eastern US playing their brand of classic metal with catchy riffs, powerful vocals, and sing-along choruses, and released their debut EP in March 2010. Social justice has been an interest of the band from the start. "Justice at Last" was written in a fit of anger and outrage one late night after watching the film Paradise Lost: The Child Murders at Robin Hood Hills, a documentary about the West Memphis Three. The music and lyrics of the song cover the range of emotion evoked by the case itself, from sadness to anger, and even hope.

A Sound of Thunder is proud to release "Justice at Last" in support of the West Memphis Three. This charity single gives WM3 supporters a chance to join together and raise a large amount of money for the WM3 with only a $0.99 individual donation. It only takes $0.99 and one or two clicks of the mouse. Please click one of the links below, buy the song, and help free Damien, Jason, and Jessie.