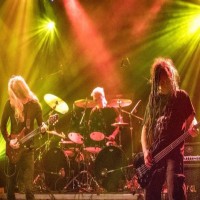 The classical line-up of Cancer, consisting of singer and rhythm guitarist John Walker, drummer Carl Stokes, bassist Ian Buchanan and lead guitarist Barry Savage, will reunite in order to help promote the re-release of their first trio of albums by Cyclone Empire Records. It has not been confirmed which festivals the band will appear at, though it has been stated that they will only be playing material from the three early albums.

The band comments: "Through persistent demand from Cancer fans and a process of gang pressing we're happy to announce a reformation of the classic line-up, John Walker (vocals, guitar), Carl Stokes (drums), Ian Buchanan (bass) and Barry Savage (guitar), to promote our first three albums (1990's To The Gory End, 1991's Death Shall Rise, 1993's The Sins Of Mankind) which are being re-released by Cyclone Empire records later this year. Check us out when we play the festivals and remember to hold on to your bollocks!"

The band, formed in a pub in Telford, Shropshire back in 1988, were among the first British death metal bands, and one of the first to be signed for international distribution. Their second studio album, Death Shall Rise, has been ranked as one of the best albums of early death metal.