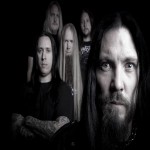 UPDATE on 14.10.2013 [Thanks to Bad English]: A few days ago, Aeon announced the departure of long-time guitarist Daniel Dlimi from the group. After some speculation, the band has now released another statement confirming that the band will continue and in fact, they are already working on their next album to follow Aeons Black.

Latest update: "Ok folks. Since some people are asking us if we will continue as a band or not after Daniels departure, let's make it clear that we will continue to spread our dark music. We always knew that this point in our career would come. When we would be asked to tour more and more, but the touring does not cover the loss of income from our day jobs... and it is a very difficult point. With this band we do get paid, we just have to cut on our losses. But the rest of us still wanna give it a try! We still have faith that there is a need for some true death metal in this world! The fire still burns!

We will also be looking for a replacement for Daniel of course. More info on this will come soon. And we just got started working on our next album... how about that folks?"


Original news, published on 10.10.2013: With 12 years and 4 full-length albums on his back, guitarist and co-songwriter Daniel Dlimi has decided to leave the Swedish brutal assault Aeon.

Daniel's statement reads as follow: "It's with a heavy heart that i finally have decided to call it quits. Why?!? I simply cant afford doing this no more. To tour with a band in our size, you actually loose money on each and every tour. For us, the expenses is always higher then the income, and if that wasn't enough, i also need to take time of from my daytime job which means absolutely no income at all during the period of a tour plus the extra expenses i get from the tour that does not get covered by the tour-income. You see where this is going?

We have done four tours this year alone and each one of them have made us loose money. I have actually NEVER done a single tour and made a single dime in the end of the day. I am actually paying money to do shows for you guys. And the saddest thing about this is that the industry expects you to do so. Something must be seriously fucked up when for example the driver, the sound guy, the merch guy, the tour manager etc makes more money on a tour compared to bands on the bill that is not headlining?!?

The one thing i love doing the most with my band is actually being on stage performing for you guys. But my passion for the music simply won't pay my bills. And as we all know, the record industry is suffering as hell and the record sales are lower then ever. So the only way to grow your band bigger is to do new albums and tour like hell... If you are lucky enough, one day you will be at a level where you actually get paid for you job, And like i said, i can't afford doing all the tours required to maybe one day be a big enough name to do headline tours and actually make money out of it.

Neither do i see an option to stay with Aeon and only record albums since the reward for me with doing an album is to actually perform the songs on stage. And if i can't do that, there is simply no point for me to go on.

So with this being said, i am now leaving the world as a "professional" musician. Because you are considered to be a professional musician if you have released 4 albums world wide and toured Europe, US, and Japan right?!? It's ironic in many ways... It's pure charity.

A big thanks from me to all the fans that has been supporting us through the years, Metal Blade Records for being a super professional label and not least, all the crazy and awesome guys in all the bands we have had the honor to toured with. Cheers!!!!"