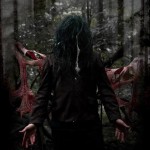 Almost everyone has left Nader Sadek, all but Nader Sadek, its artistic director. Travis Ryan, Martin Rygiel, Flo Mounier, and Rune Eriksen no longer wish to be associated with Nader Sadek and his project. According to them, the ongoing drama has intensified to a point where they have decided to focus their time on their other projects.

Nader Sadek also said: "Nader Sadek is not a band, never was, never will be, it will never have a steady line-up, ever evolving, mutating and deforming by my will alone. I AM Nader Sadek (and here's a pic of me on top of a pyramid Emoticon smile) thanks to Marcus Zakaria for snapping this great moment of liberation and self-existentialist realization!"

And he added: "People grow up and change, read my previous post form this morning, I simply did not want to work with those guys again. Want to give the opportunity to more talented yet less known artists."