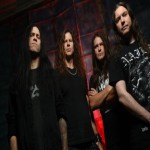 Act Of Defiance are releasing their second full length, Old Scars, New Wounds on September 29th this year through Metal Blade Records. This August 4th, the band premiered the first single for the new record on SiriusXM Liquid Metal. The song is called "M.I.A." and will be the opening track on the new album. The tracklist and album cover artwork have also been revealed and can be seen below.