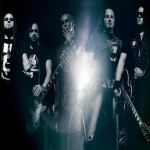 The Polish group Black River is back and they are recording their third album! The band featuring Behemoth's bassist Tomasz "Orion" Wróblewski and Dimmu Borgir's drummer Dariusz "Daray" Brzozowski has entered the studio and their third full-length is tentatively due in the first quarter of 2019 via Mystic Production.

"We're ready to announce that Black River is coming back to life!" says Daray. "We have written a dozen or so new songs, which are going to be laid down on tape during upcoming session. We're super-excited about playing together again and the energy that we create."

He adds: "The working title of the new record is BlackPunk and it perfectly captures the attitude that we're approaching it with. The next step would be shows, but they will follow in the right time. Now it's time for the album!"