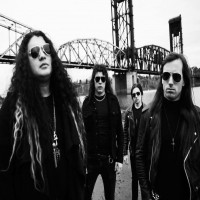 Gothic heavy metallers Idle Hands are set to release their first full-length album, entitled Mana, on May10th through Eisenwald. Entering into the studio only four months after the release of their highly acclaimed EP Don't Waste Your Time, Mana conjures up an emotive 40-minute ride into the realms of heavy metal, new wave and goth rock. The first taster "Give Me To The Night" was unveiled in February and now you can also stream "A Single Solemn Rose" below.


Gabriel Franco commented on the track: "Arguably the least metal track on the album, the song actually turned out to be my favorite. Since the first single was straight-forward heavy metal, we decided to show the other side of the Idle Hands musical spectrum on 'A Single Solemn Rose'. I think I was just trying as hard as I could to write a Journey song."

Mana was recorded between the months of November 2018 to January 2019. Drum production was executed at Sharkbite studios in Oakland, CA with producer Zack Ohren (Machine Head). Tracking of all guitars and vocals were completed at Falcon Studios in Portland, OR with producer/engineer Gabe Johnston, and followed by mixing by Gabe Johnston and Gabriel Franco. Brad Boatright gave the album its final touches at his esteemed Audiosiege mastering studio (Corrosion Of Conformity, Yob, Poison Idea, Mantar).

You can catch Idle Hands live during their "Mana European Tour 2019", which is kicking off in a few days. Check out this location for all events as well as the flyer below.