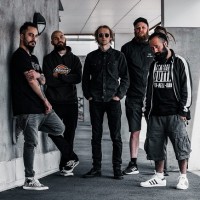 According to Loudwire news, posted yesterday, members of Iranian metal band Confess have been sentenced to 14 and 1/2 years in prison by the Revolutionary Tribunal of Tehran for playing metal. The band's main man Nikan Khosravi has also been sentenced to 74 'lashes'. More details can be read in official news statement below.

Iranian metal guerrillas Confess have been sentenced to 14 1/2 years in prison by the Revolutionary Tribunal of Tehran. For the crime of playing metal, frontman Nikan Khosravi has also been sentenced to 74 lashes.

In 2015, Confess made headlines worldwide after being arrested by Iran's Revolutionary Guard. Musicians Nikan Khosravi and Arash Ilkhani were thrown into solitary confinement and initially faced the death penalty for blasphemy and advertising against the system. According to Khosravi, Confess dodged execution due to a loophole in Iran's practice of Sharia Law.

"If you insult the Prophet you will get executed, because he's dead and he can't defend himself. But if you blaspheme God and question his existence, he can forgive you. That was why we didn't get executed," Khosravi explains.

After being released from Evin prison to await sentencing, Khosravi and Ilkhani fled to Turkey. Despite filing an appeal against the charges they faced, Confess were eventually granted asylum in Norway, where the duo resides today.

Loudwire was able to obtain a legal document from the General Judiciary of the Province of Tehran outlining Confess' sentence, which was handed down on July 3:

Regarding the appeal of Mr. Arash Ilkhani and Mr. Nikan Khosravi, each of them have been convicted to 5 years in prison on charges of insulting the sanctity of Islam and one year in prison on charges of propaganda against the regime of the Islamic Republic of Iran, according to the set of contents, news, and received documents displaying the continuation of the activities, the court of appeals has found the allegations well-founded and precise. In the received documents, the court has convicted Mr. Nikan Khosravi to two years of imprisonment for three counts of insulting the Supreme Leader and the president. He has been sentenced to 6 months of imprisonment and 74 lashes for allegedly disturbing public opinion through the production of music containing anti-regime lyrics and insulting content and for participating in interviews with the opposition media. The accusation of attempting to leave the country has also been confirmed by the court. In this regard, Mr. Khosravi has been convicted to 4 years of imprisonment. Regarding Mr. Arash Ilkhani, the appeals court, by reviewing the contents of the case and considering his role in the production of content in the music group named Confess and his inactivity in the group during the trial, suspended 4 years from his 6 years of imprisonment and confirmed 2 years of his conviction.

The court declares this statement to reject the request of an appeal. This is the definitive vote.

Altogether, Khosravi was given 12 1/2 years in prison and 74 lashes. Ilkhani had his initial sentence of six years reduced to two years.

In response to the sentencing, Confess have released the new song "Evin", named after the prison where the musicians were held after their 2015 arrest.


"Evin" is part of the band's upcoming album Revenge At All Costs. The track listing, artwork and release date will be revealed soon. To support Confess, follow the band on Instagram.