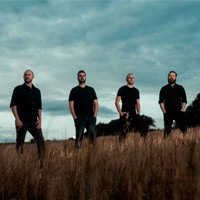 Willowtip Records is proud to announce the signing of the UK-based melodic death metal band Countless Skies. The band's newest album Glow will be out November 6th (Digipak CD, digital and vinyl formats). Drums recorded by Forbes Coleman at Audiobeach Studios, Choir recorded by Chris Stroud , everything else recorded by James Pratt at Cinnamon Studios. Mixed and Mastered by Juho Räihä at SoundSpiral Audio. Below you can check out the first single, called "Summit".

The bulk of the album was recorded in the home studio of guitarist James Pratt. James had this to say about the process: "It took a lot of learning and some expensive purchases, but it did have its upside. Not under the normal time constraints of being in a studio, we could take more risks, and get better performances from everyone. We also spent a lot of time adding more layers, harmonies, and even some extra instruments."