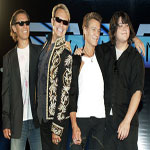 Bassist Wolfgang Van Halen recently told Howard Stern that out of respect for his father Eddie, who died of cancer over a month ago, their namesake band Van Halen is officially done.

Wolfgang, who shot down rumors that he would carry on the Van Halen name by filling in for his father on guitar, clarified: "That's fucking stupid. You can't have Van Halen without Eddie Van Halen. I'm not my dad. I'm not going to replace him. I've spent my life making sure I'm not like him and I'm my own person."

He also stated that if Eddie were still alive, he would want his son to pursue his own career: "He'd be like, 'What the fuck are you doing? Go do your own shit!' In my opinion, outside of maybe a tribute show at some point down the line and archival releases further down the line, it's done. I don't have a dad anymore and I'm coming to terms with that. So, I think fans can come to the terms with the fact that we're not going to have Van Halen anymore. The music is going to live on forever but you can't continue without Eddie Van Halen."


In other news, Wolfgang has launched his new solo project Mammoth WVH, which just recently released the song "Distance" in memory of his father.