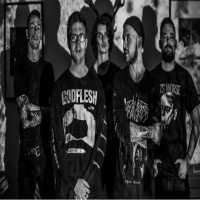 Dvne have dropped a brand new video for the title track off their new EP, entitled Omega Severer, which was released earlier this month. The video was edited by the band's very own Daniel Barter.


Dvne recently said the following about the EP and the forthcoming full-length:
"We've been overwhelmed by the positive response to the EP so far, and a lot of you asked about the album release plans. The album was originally due for release this summer, but due to COVID-19 cancelling all our tour plans, we decided to put this back until Spring 2021. So in the meantime we've decided to release the Omega Severer EP to give you an initial glimpse of what we've been cooking up. Thank you for your continued support in these difficult times, it means the world to us. Stay safe and we'll see you on the road in 2021."