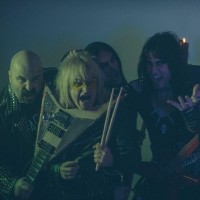 Sabïre, a heavy metal quartet based in Australia (originally Canada), announce with the excitement that they have completed work on their debut full length instalment. It's entitled Jätt and will be released later this year (exact date TBA). The cover artwork has been revealed as well and can be seen below.

Statement from the band as follows: "We are so proud to announce to you that our debut full-length album Jätt is finally going to be completed and released this year; 2021. It has been a long, hard two year journey. Nothing about this album has ended up being straight forward. It has been exactly as its title suggests: Hell. And that has not been a good thing. Regardless of the tumultuous journey, the record is huge, both in sound and depth. Jätt is what we are calling a "half-concept album", which means there is a strong theme in the title, cover, colour, and overall vibe, but none of the songs, bar three, have been written to the concept; they just simply touch upon the theme in one way or another, to greater and lesser degrees.

"Jätt is a "blue" sounding album; the colour. You may understand that more when listening to the album yourself. The cover of Jätt, 'Dante and Virgil in the Ninth Circle of Hell' - Gustav Doré, 1861, could be seen through a symbolic lens in which the listener is symbolised as Dante, the artist as Virgil, and the bodies locked within the ice of frozen lake as the music surrounding them; we as the artist are shepherding the listener through the mire. This could be perceived like this, or you may just see it as an attractive album cover.

"Essentially, we cannot wait for you to enjoy this album. This is it. This IS the definition. This is the true unveiling. Share near and far, tell anyone who will listen. Play it loud with friends, or brood over it alone. Either way you are sure to be at the complete mercy of this beautiful display of A C I D M E T A L ."