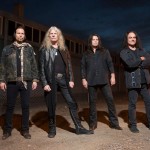 Resurrection Kings, consisting of Craig Goldy (guitars), Chas West (vocals) and Vinny Appice (drums), have announced their return. Skygazer, the follow-up to their self-titled debut album, is the newly announced 11-song music piece that will be set free on July 16th, 2021. The band have also released a single for the title track, which serves as a first taste of the new music.

"Once again, with the talent pool in which we have access to create, we all brought our "A" game to the writing and recording of this album. With the freedom to utilize the music that we all were influenced by that started our musical endeavours to begin with, hopefully we expanded upon them in a way in which to inspire another generation of listeners to start a similar journey," says guitarist Craig Goldy.

Of the first single, Goldy adds: "It started out with a drum groove sent to me by Vinny. His unequaled playing style automatically inspired the music and then Alessandro wrote most of the melody lines and lyrics. Besides the music, I wrote the melody and lyrics for two pre-choruses that sum up the song's meaning. It is a metaphor for the lengths to which our nations' leaders will go to acquire, keep, or grab more power for their own ambitions. That leaves us in their wake asking what measures are needed to defend ourselves. All of this comes at what price though?"