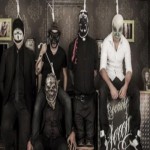 French avantgarde quintet 6:33 have unveiled the third single, "Flesh Cemetery", from their upcoming album Feary Tales For Strange Lullabies: The Dome, set to be released on October 1st. They also released an official video that you can watch below.