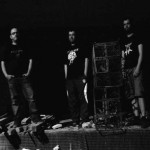 As part of their forthcoming studio album Deathcall, Greek based doom metal trio Agnes Vein now stream the title track with accompanying official video. The latter was directed, filmed and edited by Vangelis Neofotistos. The new outing, set to hit the streets December 17th through Venerate Industries, was recorded at Blueberry studios by Joan and Kostas Kofinas during the fall of 2017. Mixed by Joan at Zona Sound and mastered by Brad Boatright at Audiosiege.